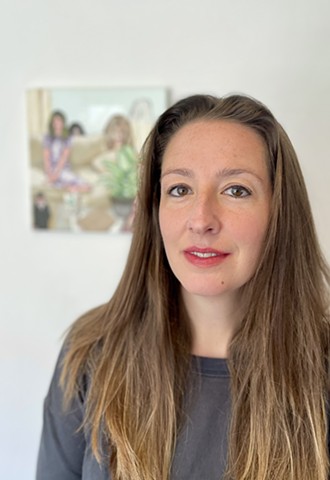 Sydney Chastain-Chapman was born in 1979 in Northampton MA. After graduating from Cornell University in 2002 with a BFA in Painting and a BA in American Studies, she continued her study of painting in the MFA program at Hunter College in New York City, earning an MFA in painting in 2006. Chastain-Chapman’s paintings depict fractured worlds that mirror our own, and center female figures who must do their best to exist in precarious circumstances. Utilizing a variety of painting styles and resonating with surrealist modes of image-making, her work investigate themes such as domestication, artifice, construction, over-consumption, beauty, climate change, and the failure inherent to human endeavors. While there is a sense of tragedy to the paintings, irony, comedy and the desire to triumph exist as well. In addition to traditional acrylics, Chastain-Chapman uses glitter in her paintings. Glitter adds a sparkle that can't be achieved with paint alone, and its cultural associations relate to the themes of femininity, artifice, and beauty in her work. Chastain-Chapman has been represented by Kravets|Wehby Gallery in New York City since 2004. Her work has been shown in solo, two-person, and group exhibitions in New York City, Rome, Los Angeles, London, and Paris, and is held in numerous private collections. Career highlights include the 2021 exhibition Now You See You: American Perspectives in Painting at Mucciaccia Contemporary in Rome, a two- person exhibition in 2012 at the Nassau County Museum in Roslyn, NY, inclusion in The Incomplete at the Chelsea Art Museum in 2007, and a 2008 profile in Art World Magazine. Sydney Chastain-Chapman currently lives and works in Nyack, NY.